Burton Tysinger creates mesmerizing sculptures using straight, rigid and colored line segments (thin, hardwood dowels) to assemble his three dimensional images. Length, density, placement, color and direction participate in the work. At times, it is a tangle of colored lines creating an abstract piece, or, at other times, an orderly layering of lines to create a three dimensional sculpture or a haphazard bundle of lines all in one direction.

The opening reception is First Friday, March 6, 2015 from 6-9pm.  This event is free and open to the public. 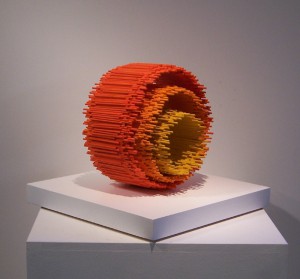 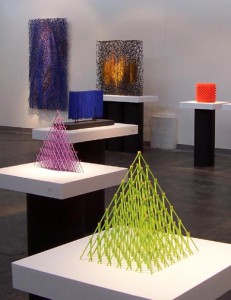 Burton Tysinger’s art career began as a high school teenager when he received a scholarship to the Abbot School of Art in Washington, D.C. Subsequently, he studied architecture at Penn State and upon graduation attended Pratt Institute where he graduated in Industrial Design. Originally he became a spare time painter while pursuing a professional design career in New York. This pursuit took him to Africa and throughout the US as well as a span of time on the West Coast. In time he realized he preferred to express himself three dimensionally. After seeing a Jackson Pollack exhibition he was inspired to apply his love of bright colors (acquired from working with Florence Knoll) to his constructions of thin brass rod sculptures.. A native of North Carolina, he recently returned from La Costa, California to Wake Forest, North Carolina where he has maintaied a large, full-time studio in his home.