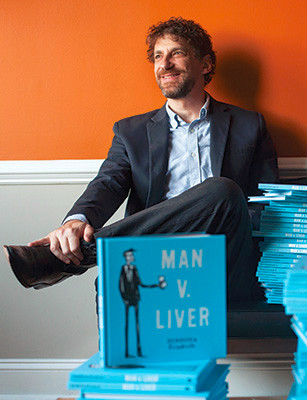 The First Friday in November has become a tradition of featuring the artwork of Designbox member, Paul Friedrich. We are excited to be able to continue that tradition this year. From urban art on skateboards to a cartoonist’s version of a beach scene to art and books about the enjoyment of drinking, this years show is all Paul all the time. Paul is creator of Onion Head Monster and  co-creator of Man v. Liver.

AND our November Creative Collisions speaker is Paul!
Bring your questions and join the discussion on Wednesday, November 12th, at 12:00 noon.
This event is FREE and OPEN TO THE PUBLIC. RSVP today!

Check out the the IndyWeek feature on Man v. Liver, and read more in his Carolina Hurricanes bio:

Known for his humorous paintings with characteristic bold colors and lines based on his Eisner Award-nominated graphic novel “Onion Head Monster,” Paul Friedrich is considered one of the artists and writers in the forefront of the LowDefPop art movement.

Paul was on the founding team of SPARKcon, the South’s pre-eminent conference on creativity. He’s a member of the award winning DesignBox, created the graffiti mural at Marbles Kids Museum and has been selected each year for the CAT Bus Art-on-the-Move project, editor of HellCar Magazine, two-time champion of the Xtreme Suburban Endurance Event, as well as author/illustrator of several books, including “Lions!,” “Don’t Trust Evil Knievel,” and “The Wolf Who Cried Boy.” In 2009 Paul became the National Hockey Leagues first ever pop-cartoonist with the launch of Stormy the Pig’s CUP OF AWESOME comic strip.